#102 Behind the Scenes Brainstorming Dialogue about Effective Giving Strategies for Season 2 , With Sybil Ackerman-Munson and her husband Fred Ackerman-Munson Part 1 of 4 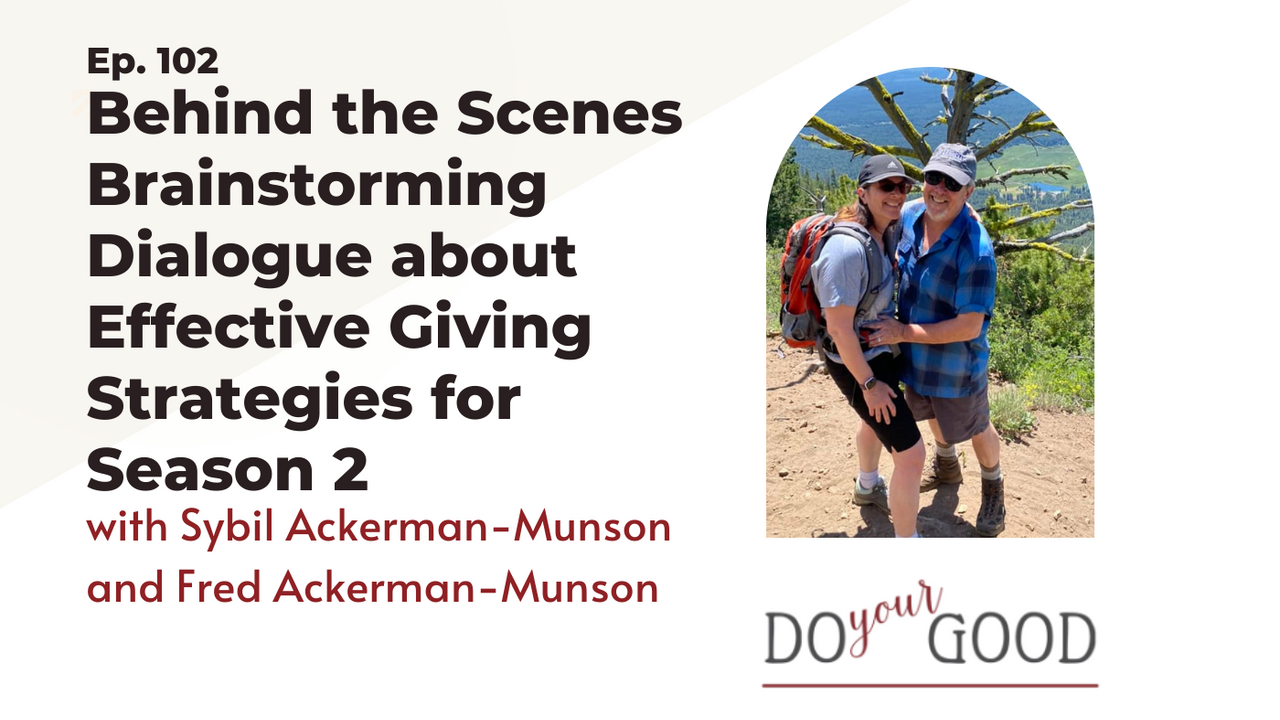 Sybil is joined by her husband, who is also an expert in philanthropy, in a special behind-the-scenes series to set the stage for Season 2. This is the first of four sessions you will have the opportunity to listen in on as Sybil and her husband figure out the best topics to address in detail for Season 2 of Sybil’s podcast series.  This is a fun and informal brainstorming conversation about effective philanthropy that will set the stage for a deep conversation in 2023 about key themes and trends to discuss in the upcoming year. Enjoy this behind-the-scenes conversation and get to know Sybil and her husband just a little bit better.

With over 20 years of experience as a nonprofit professional and foundation advisor, Sybil works with philanthropic institutions and foundations interested in successful, high-impact grant making, so they can make a true and lasting positive contribution to the world on their terms.

If you enjoyed this episode, listen to these as well:

#69 Tips to Support a Nonprofit in Pursuit of Best Practices with Patton McDowell, Founder, PMA Consulting

Become even better at what you do as Sybil teaches you the strategies as well as the tools, you’ll need to avoid mistakes and make a career out of philanthropy through my new course, Crack the Code!

In this new course, you’ll gain access to beautifully animated and filmed engaging videos, and many more!

Connect with Do Your Good

Send in your inquiries through her website www.doyourgood.com, or you can email her directly at [email protected]!

Hello everyone. Welcome to episode two of season two. I like that number 2 and number 2, are so symmetrical.

Anyway, I wanted to just remind you about what I'm going to do in Season 2, which I'm very excited about. What I'm going to do is all through 2023, every month I'm going to have a specific theme that I dig into very deeply around giving. And I'm going to work with my husband as well and think through with him the key topics we both might want to discuss in 2023.

So, one time each month, Fred and I, my husband, will discuss in detail and do research as well as draw upon our own many, many years of experience as funders, talk about the key themes and the key issues we see coming up.

And so, I'm just really excited to do this project with him. In addition, there's also, you know, three additional weeks in each month. There'll be one where I'm getting into it with Fred talking about all the issues, and then in the other three episodes, I'll dig into that same theme in a variety of different ways, such as with one-on-one, interviews with other experts, and also just my conversation with you about the key topics. But to get us all warmed up for this, Fred and I sat around and talked about what could be some potential themes.

I've broken up our conversation into four distinct sections so you can hear sort of where we're going, and you'll hear the real raw conversation. And also, you'll even hear our dog running around in the background. But I just wanted to bring you in on this kind of conversation on the raggedy edges. Have a listen and I hope you have fun listening to this because we certainly are having fun having these conversations. We're in the creation phase of thinking through what our outline is going to be for the next year. We're in the creation phase of thinking through what key issues we want to talk about. Your voice is important, and without further ado, here's an excerpt from our conversation. I hope you enjoy it as much as we enjoyed discussing really important giving strategies.

I believe I could take my podcasting to the next level with your assistance. What are some key topics on which we'd like to have an impact on society, and why is this important?

The concept of spending down or not spending down.   There are tips and tricks and things to think about, but that's what I'm thinking about, what are the underpinnings behind either you spend down your corpus and you like, give all your money away in your lifetime, or you have a foundation that's in perpetuity and so your kids and your kids' kids are continuing to give money away?

And yeah, there are tips and tricks and hints, and I have lots of courses and stuff like that, but I think for the podcast it would be more interesting to talk about…like with that issue, what are the reasons behind spending down or not spending down, and how many foundations are doing those things? And then you and I debate it because we have strong opinions.

Yeah, yeah, I feel like they're all… well…so are we going to talk about that now or later?

We are going on the

Well yeah, let's go back up. I just used that as an example

OK, so we can talk OK, so spending down. That's a topic

Yeah, let's put that on the list, yeah, because that'll be interesting to talk about beyond just yes.

OK, next topic. The next topic I'm thinking about is that this is not a topic that we talk about in the foundation world.

It has to be a topic we talk about in the foundational world!

But with linked to giving effective.

No, because you're not thinking. Yes, here's what I'm thinking.

The dog is drinking water!

I'm in suspense. I want to know what it is. What's this topic?

But I can't do it while he's like over there doing his own thing.

OK, OK, so I'm thinking about the question of why people give.

Yeah, I don't know how many people just wanted to get thanked though. That's not really some.

Well, OK, so. Well, thanked is another way of saying they feel good about themselves.

I'm sure this is this gentleman who has all this money. He's probably earned it, and he wants to be effective. He's like, "Oh yeah, he got his money, the old-fashioned way, he inherited it. He doesn't care about effectiveness at all. It's just like if you smile and make friends with him, He'll give you money. So, I mean so there are a lot of interesting people out there. I think it's really interesting to delve into the psychology of why people do what they do; we believe you know who you are.

So that particular example was more like, "Who knows why this person is giving? It's really, really like this almost superficial was almost when you were saying that the story was almost making me cringe a little. But because I'm thinking about

All the people that I work with really care, but you were saying that some people just give.

Right, no, I know that's the thing.

Because who knows why? Maybe their secretary is saying it cares about it and they're having a really good time at a party that they funded for themselves. And they're like, "sure, I'll give you that money”

In comparison to the type of people, I work for. I feel it is up to us to find him because…

The dogs are barking!

And this might be a good time for an ad but don't go anywhere. I'll be right back.

So, the reason I'm thinking about that…

OK, so that example was A little over the Although true, the reason I'm thinking about it is in the foundation world. Some people are quite aware of the power that you're given when you have money. And I think it's in the private donor world as well.

All of a sudden, your jokes are always funny. Everyone thinks you're right, and then you don't get anybody telling you you're full of crap. And so it is, you don't have that nice counterbalance.

So, you're talking about the pitfall, but what I'm talking about is the underlying psychology that's at work. Why do people give to people who aren't necessarily aware of that?

At the funder level, to call it that right, they are getting a certain psychological benefit from being seen as generous and being brought up on stage at whatever thing it is right in their name on the wing of the museum.

Yeah, I was not even aware of that. But it's, yeah, the building that they've helped fund. And they're like, "Oh, I feel so great. And everything is great.”

And all of those things together.

That's exactly what you meant by wanting to be thanked.

Yeah, and it even works on people who Give a $25 gift right to Planned Parenthood.

And I feel like what we can do is, I mean it, there are all these different pieces of the psychology of giving, but we can do a bunch of reading on those pieces like we already know a lot about it, but let's like systematically do some reading on it.

Yeah, definitely. Okay, I love it.

That and now for an ad, but I'll be back soon, so don't go anywhere.

Well, that was fun. I am hoping that you enjoyed listening to Fred and me sort of talk through what we might want to focus on. These are just two of the ideas that I am going to present. The other ideas in the next three episodes, I’m going to pull out more of our one-on-one conversation to think through things.

And I also welcome any of your ideas for themes that you think we should dig deeply into during 2023. And like I said before, we're going to have 12 key themes that we're going to focus on and right now what you're witnessing by listening to these conversations that I'm having right now during the month of November. These are the conversations where Fred and I are trying to figure it out, and you're hearing all the raggedy edges in the discussion.

And I, that's why I'm doing this, is because I want to bring you in. I want you to DM me and tell me what you might be interested in talking about also.

Thanks a lot, and thanks for listening. I look forward to talking to you and hearing from you. I hope you enjoy more of these conversations in the future by listening to my podcasts.

Until next time, Do Good and Be Well.

Sign up for future updates, new courses and freebies!

We will only send the most important information.